False Impersonation of an Officer of the United States is illegal. The unknown man pictured should be identified, located and punished. 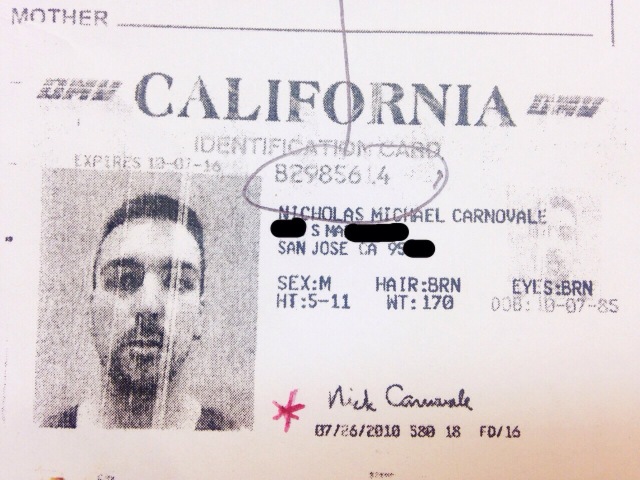 The California ID with Captain Carnovale’s information but the unknown man’s image. 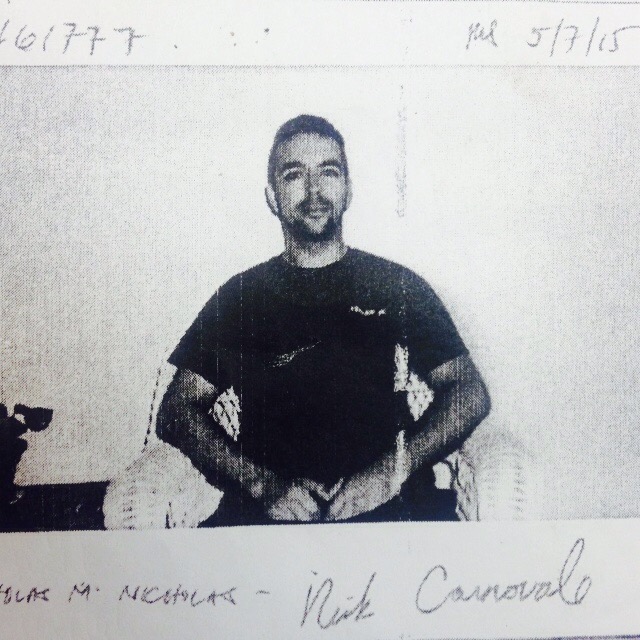 The required photo taken after DNA collection portrays the same unknown man pictured on the ID and identifies him as Nick Carnovale.

The answer to that is even more disturbing than actual identity theft. It appears Captain Carnovale himself equipped this man with his Identity in an attempt to cheat a court ordered DNA test. 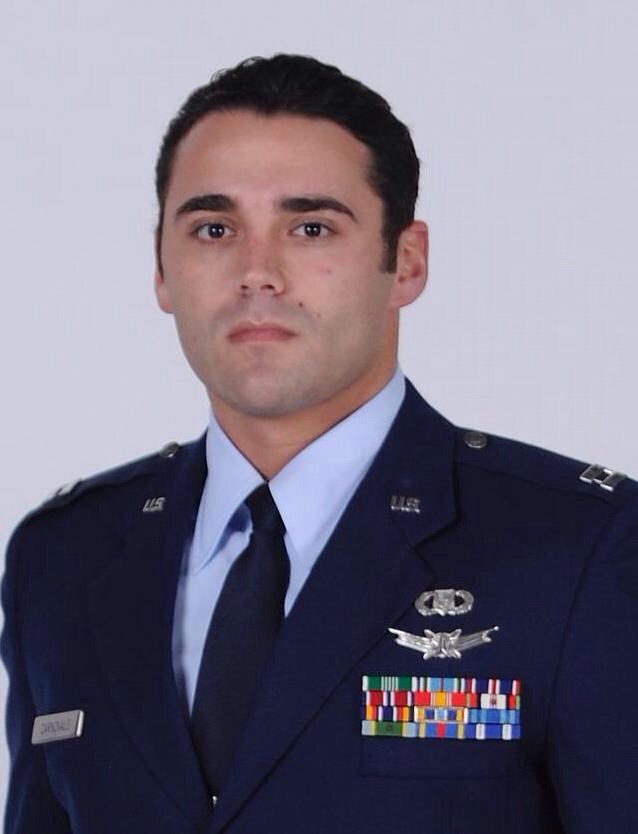 When a court in one state orders genetic testing for someone residing in another state the test is preformed at a government contracted DNA collection center. The person being tested is required to show ID, leave a thumbprint , and have their photo taken after DNA is collected. This is all attached to their lab results and sent to The Office of the Attorney General in the state where the order originated.

Attached to the paperwork for lab results excluding Captain Carnovale as the father of the child in question , were photocopies of the ID given and photo taken at his DNA testing appointment. The child’s mother , Ms. Angela Nowka, immediately realized both the photo on the ID and the Polaroid taken after DNA was collected, depicted someone other than Nick Carnovale. 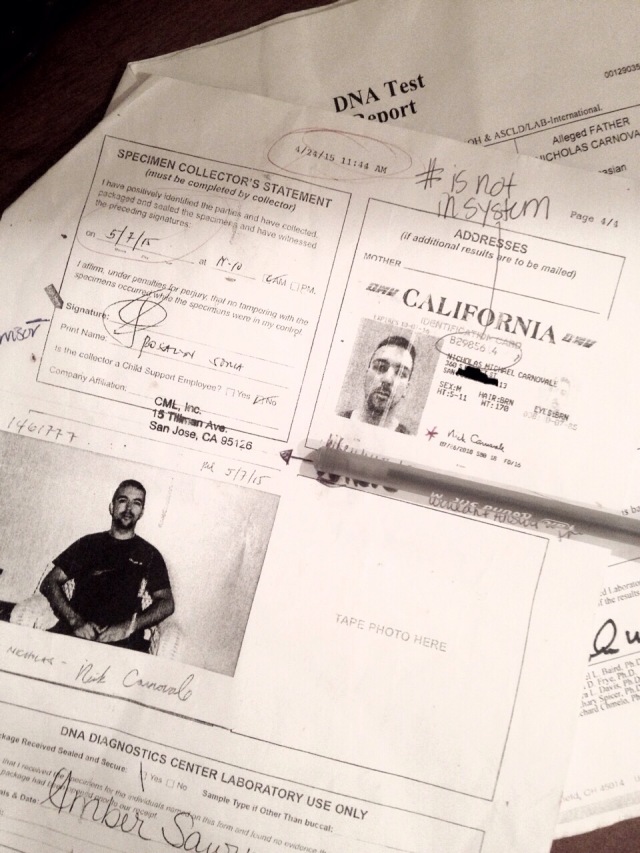 The OAG representatives and Carnovale’s attorney were told that the photos were not of Nick Carnovale. Despite having never seen Captain Carnovale, the OAG refused to investigate the situation any further. “I showed them pictures of Nick, explained that facial hair was not allowed per USAF regulations and asked them to validate the ID or thumbprint”, said Ms. Nowka. Her request for a formal inquiry into the matter was denied. The OAG conceded only to a retest, stipulating That Ms. Nowka cover the cost prior to the order being issued, stating that their office “is satisfied with the current test.” 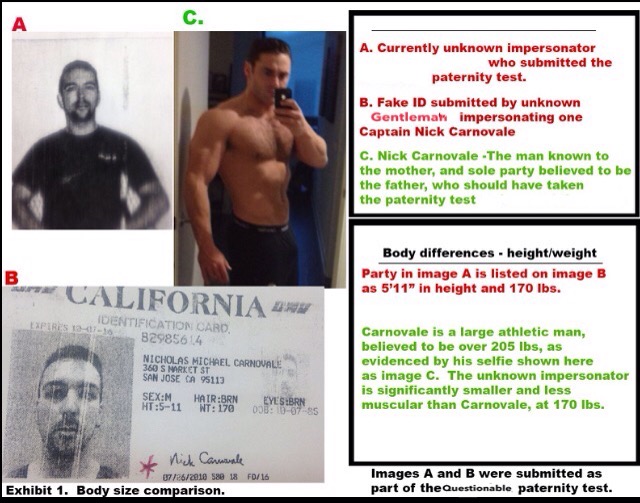 The next day Ms. Nowka made a phone call to the California DMV requesting verification of the number on the ID presented at the DNA test. The number was run 3 times with zero results. The California DMV confirmed that an ID card bearing a number that is not in their system is a fake ID card. 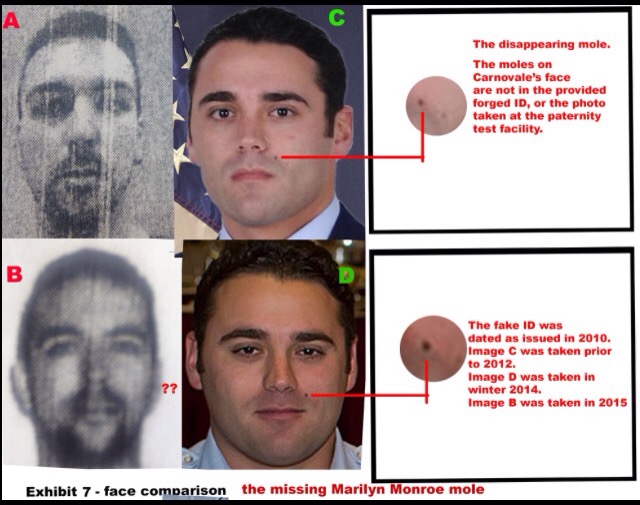 The next call Ms. Nowka made was to the DNA testing site where the sample was taken. The manager she spoke with confirmed that DNA Diagnostics Center does not verify the authenticity of IDs given and does not run the thumb print taken against any database. However, when collecting a sample, Specimen Collectors are to fill out the client’s paperwork accurately and to completion. Their role is to follow chain of custody procedures to ensure the test is acceptable for official purposes. Captain Carnovale’s paperwork inaccurately lists his form of identification as a driver’s license and leaves blank areas for his ID card number and his social security number. Both the testing facility and the specimen collection company are used by law enforcement agencies as well as the family court system. The paperwork errors imply negligence at best and at worst are an indication of something much more troubling. The policy of collecting and passing on unvalidated information coupled with the employee’s oversight or complicity, made perpetrating this fraud disconcertingly easy. 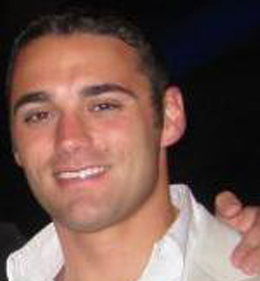 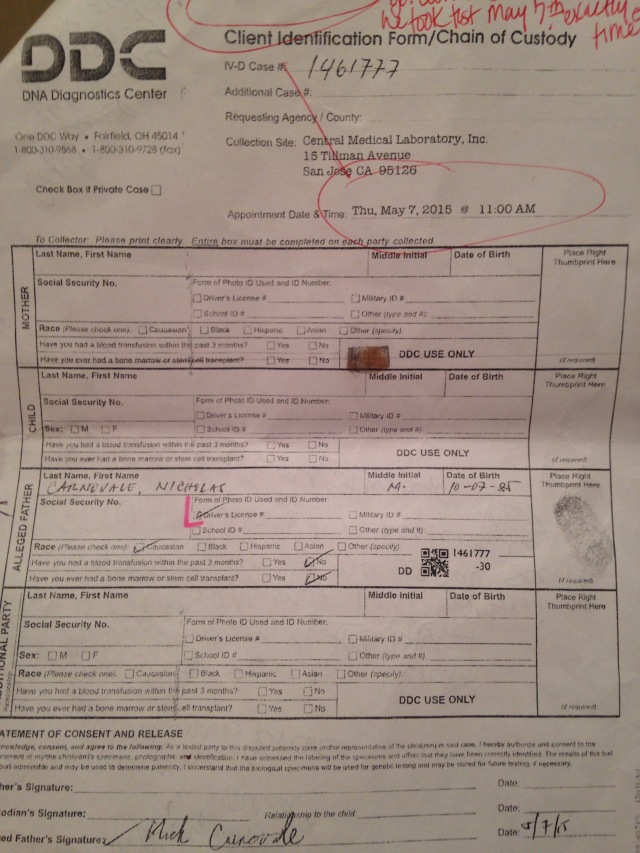 The top of the form states “…Entire box must be completed…” Yet Captain Carnovale’s box has blank spaces and inaccuracies.

Considering that the ID has been confirmed as fake, the thumbprint has not been confirmed as Nick Carnovale’s and the obvious physical discrepancies between the two men, it seems that Ms. Nowka was correct in her assertion that Nick Carnovale did not take his paternity test.  This leads us to believe that the unfortunate reality is not only has Captain Carnovale defrauded the court and falsified documents, he has armed a criminal for hire with his identity as a United States Air Force Captain. The yet unknown man presumably hired by Carnovale, now has uncontested genetic proof that he is a high ranking military officer with upper level security clearance. 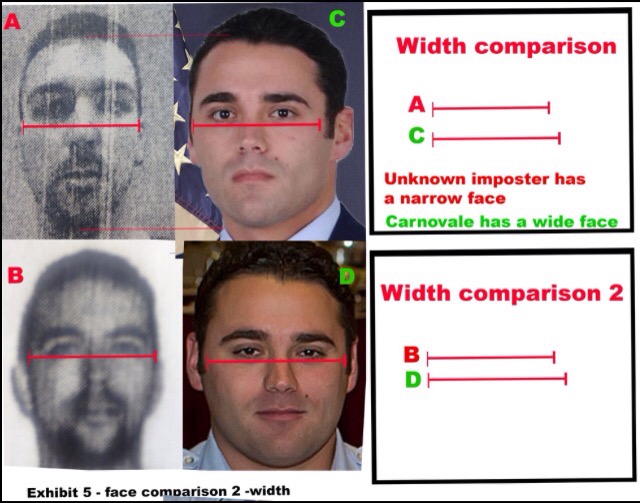 “He said many times that he would do ‘whatever it took’ to evade responsibility”, According to Ms. Nowka

The Child Support Division of the Texas Office of the Attorney General has been made aware of the facts presented here. The case worker in charge continues to ignore the evidence, offer incredulous options rather than solutions and has halted any efforts to either confirm the fraud or ensure the same fraud is not repeated at the next test. 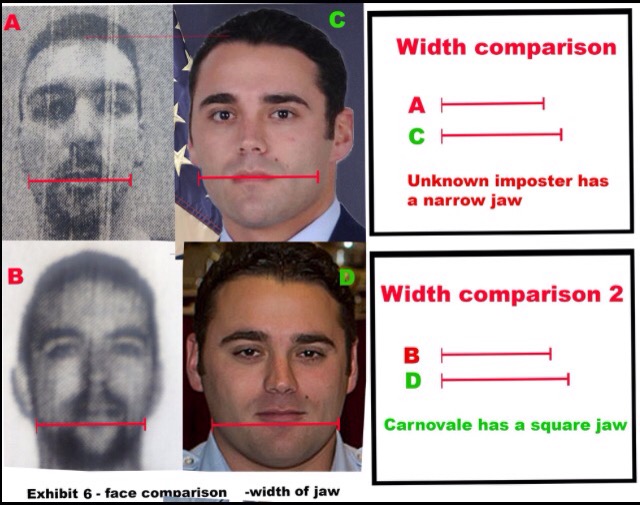 What do you think? Are these photos of the same man?

San Jose State University and Carnovale’s superior officers have stonewalled all inquires regarding the Captain , further insulating him from responsibility. 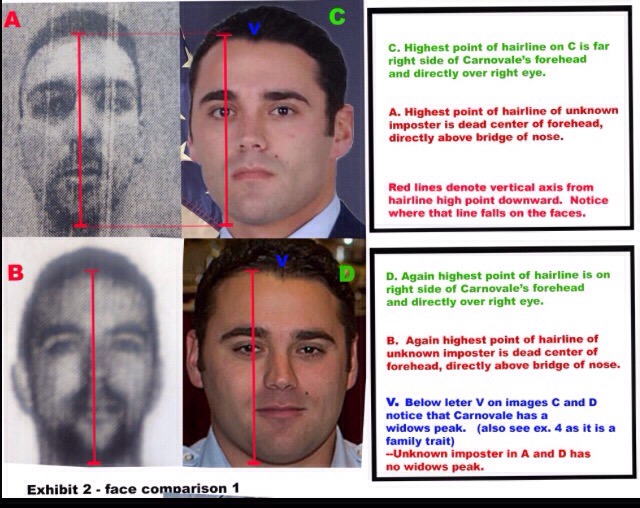 Not only is Carnovale a Captain in the Air Force, he heads the ROTC program at San Jose State University where he is also an Assistant Professor of Aerospace Studies. These are dignified positions that command the utmost integrity. Yet evidence points to this man committing a felony according to family law code, potentially endangering national security and most deplorably, denying a child the opportunity to ever know who her father is. For an Officer in the armed services to commit such egregious acts is absolutely intolerable. Help us get to the bottom of this. Share this article, spread the word, call San Jose State University. Send the message that our children are valued, our justice system impartial, and that threats to our nation’s security will be taken seriously.

I’m Angela and the  above is part of my story. I want to make clear that Captain Carnovale has not been convicted of anything or even questioned about his actions. “Innocent until proven guilty” is the cornerstone of our Justice System. Keeping that in mind, I am in no way saying he is definitively GUILTY OF FRAUD. We are simply presenting the facts as they have been revealed to us. The readers can come to their own conclusions. I have spent 3 years pursing Nick in an effort to have him tested to confirm paternity. He has never once said he did not believe my daughter was his. Quite the opposite. I have done everything in my power to avoid calling out him out publicly.   I find no joy in airing our “dirty laundry” or divulging his abhorrent behavior and did so with great trepidation. However, the lack of regard for my daughter and for the LAW, shown by both Capt. Carnivale and the agencies involved, has left me with no other option. I sincerely apologize to anyone effected by this who did not have a hand in his deception. As a mother though, I would be remiss if I did not do everything in my power to ensure my daughter is cared for by BOTH of her parents. Thank you.