Today I spent a lot of time on the phone with various different electronic voices, and nerve grating hold music (seriously, do they intentionally record the most obnoxious tunes conceivable, for the express purpose of causing further annoyance?) I’ve got to get Britney in a day care/pre-school program so that I can start working. To that end, I had to call: 2 child care facilities, The Attny Gen /Child Support office, the IRS, the insurance company, the Tollway/Vampire Authority (They suck the life out of you, while screwing you harder than Eric Northman would), Citibank, and  San Jose State University. Britney deplores, absolutely DESPISES, me being on the phone. She can handle texting and facebook, but the second I put that thing up to my ear, her gears start turning. I can see her tiny little baby mind, intensely plotting out the  barrage of neediness she’s about to unleash on me.

I battled my way through the first few calls, my child clawing at my legs, bouncing on my lap, screaming in my face and yanking on my pony tail.  I took a deep breath and moved on to the Insurance phone call. The voice prompt machine was unable to recognize my request, and therefore just said “We are unable to recognize your request at this time. Goodbye” All patience and resolve left me. I very quietly picked my screaming baby up, placed her in her pack and play, and headed to the kitchen in search of chocolate. After a brief break (read; after I ate 2 brownies), I made Britney a snack (read; I gave Britney a brownie) and resumed my phone calls with a renewed sense of determination. I got several of them done, too. I had to pat myself on the back because not so long ago, I could not have done this. I was not capable of self soothing or taking a minute to calm down. It’s nice to see I’ve started learning from my mistakes.

I spent years not facing my problems, checking out, and numbing myself to everything. Because of this, I have had to learn how to cope with emotion. I literally had no idea how to handle stress or unpleasantness. That’s why God made Valium, right? When I was faced with anything that taxed my nerves, in new sobriety, I would just blow up. The smallest things sent me into fits. I was having one of those days about 6 months ago. This is when my problems with the IRS were just beginning and I was sending them tons of information. I was assigned a Case worker type and she and I were to communicate weekly. I have gnarly ADD, so making long phone calls like this, gathering paper work, MAILING THINGS, adding…  is like my own version of hell. On top of which, Britney Spears was a colicky, cranky little screamer for the first several months of her life. She rarely napped, and when she did I had to preform Something akin to a rain dance, while whisper-singing Twinkle Twinkle Little Star, off key. That morning, she cried for almost 3 hours straight. I was on hold with the IRS, as I couldn’t put off making the call any longer (having ADD, I had already pushed this to the last minute of my deadline). I was on my twenty SEVENTH minute of hold when Britney began flailing around, hitting the phone and causing it to hang up. I saw red. But, I was still in “new mommy” love, so I got her a bottle and tried again. The second time, I was on hold for less than 10 minutes when I got a text, which caused the call to disconnect. I was so angry, I grabbed the closest inanimate object and hucked it at the floor. It was the TV remote and instead of hitting the FLOOR it hit the leather couch cushion with such force that it bounced right back up and nailed me in the face. Of course, I threw it again and as you would guess, it landed on the cushion again and bounced back up to nail me in the face. Again. I was beyond frustrated, and decided to take a break. I wanted to see if I could get Britney down for a nap so that I could focus all of my attention on this phone call. The serenity I felt (still feel), as I rocked my sweet baby, calmed my fraying nerves and quieted my anger. I put her in the bassinet and went back to attempting my call.

I knew I would be on hold for a while, but when it passed the 30 minute mark, I got bored and decided to color my roots. When I was still on hold FORTY MINUTES LATER, I begin to feel that anger rising again. Just in time I heard a voice say “Internal Revenue Service How May I Direct y…” The end of her sentence was drowned out by “KNOCK! KNOCK! KNOCK!” at my door …I said to the nasally voice on the other end of the line .” Can you Ho…” Now I was being drowned out by Dexter’s barking ” BOWOWOW WOWOWO BOWOWOW!”, “…..I’m so sorry , can you hold on one secon…” I say, above the barking and renewed knocking, as I am walking to the door. Then I hear “WAAAAAAAAAAA WAAAAAAAA WAAAHHHH”  Oh, wonderful ,the baby is awake now. I am pleading with the nose talker to just hold on one second, I only need to dismiss (read; murder) the person at my door, forgetting that, with my AT&T service, I can not walk past the dining room or the call drops. I’m awaiting a response from the IRS operator, when I look out of the window and see that it’s mother, her minivan, packed like a sardine can, full of children, waiting in our drive way. I opened the door thinking something must be wrong, they must need help, Surely. No one would just IGNORE the big sign on the door that says ” DAY SLEEPER, NO SOLICITING, PLEASE DO NOT KNOCK OR RING BELL” Once more I ask the operator to hold. This is where it all goes down hill….I’m looking at this woman who I have just opened my door to. I have my ear to the phone and I hear “Ma ave all ack can’t ear ew bad conn tion” and then my screen went black. I lost the call. I lost the call. I LOST THE CALL I HAD MADE 3 TIMES AND WAITED, ON HOLD, FOR A TOTAL OF OVER AN HOUR FOR.

I think I got so mad that I momentarily left my body. I came to, still staring into this woman’s face, Dexter was still barking and Britney was still screaming. I said “Can I help you?” She looked at me and said “Hi! My name is Mrs.Ruiner” (names have been changed. Maturely) ” Hello Mrs. Ruiner, can I help you with something?” I manage to say back without sounding too contemptuous. Then, she says to me, with a straight face “We are new in town and My husband REALLY wants to buy a house on this lake, Are you guys moving any time soon?” ……..WHAT? I heard this wrong. She did not ignore my sign, knock on the door, causing my dog to bark, my child to awake and my call to drop, to ask me if we were moving. I asked her to repeat herself “I’m sorry, what?” Again, she smiled at me and like she hadn’t a care in the world, and said “We just really love this area! We want a house on the lake side of the street though, and none have for sale signs, there’s a nice one on the other side, but we want a lake lot.” I stared back in disbelief “SO, you thought you’d just walk up to people’s homes and ask them if they were SECRETLY trying to sell their house?” It came out a tad more sharply than I planned. The look she gave me, like I had done something wrong, was the straw that broke the …you know. I lost it. I came unglued.

I looked at her and said ” You just ignored the sign about knocking, knocked anyway, and woke my baby up. Not to mention YOU JUST MADE ME DROP A CALL I HAD BEEN ON HOLD WITH FOR 40 MINUTES!!!” I realized i was yelling but I couldn’t stop. “How rude and inconsiderate do you have to be? No we aren’t selling! If we were selling, we’d have a BIG SIGN OUT FRONT THAT SAID ‘FOR SALE’! What are you thinking?? You’re kids are in your car for God’s sake, you’re just walking up to stranger’s doors?” Her calm demeanor became slow and intentional, like when dealing with an angry, wild animal. She started slowly backing away, hands held up, as if to say “don’t shoot”. She started stuttering around and apologizing, I yelled one last “Why don’t you get a REALTOR like any other person??” and slammed the door.

I saw her quickly pull out of the drive way, and i almost felt bad. I realized I didn’t have Britney’s wubbanub, then ( okay, i just wanted to see where she went). I stepped out to get it from the car and saw Mrs. Ruiner’s van pulling up to the house 3 doors down. I knew Tessa also had kids, who were likely napping. Being the good samaritan I am, and still full of righteous indignation (and hormones) I , baby on hip, dog in tow, started fast walking down the street , yelling at her ” You leave them alone! She has kids, too and they are asleep! Don’t bother her! No one on the lake is selling! Not now, not next week, not for YEARS!” She smiled and waved at me! The nerve! I felt good about how I had protected Tessa from such a rude interruption. I turned to come inside, catching my reflection in the door’s glass. OH. HOLY. HELL. 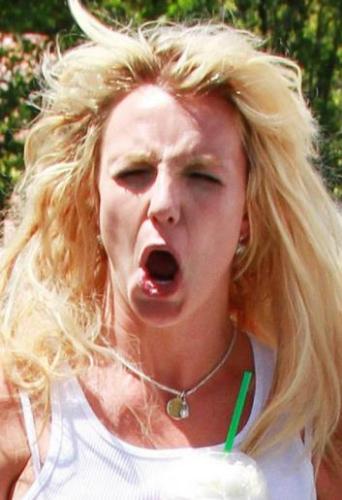 I forgot I was coloring my hair. Do you know what you look like when you’re coloring your hair?? That’s right. You look CRAZY. You literally look insane. Especially if you have short hair, which I do ( but I’ve gotta long weave!) I couldn’t find a picture to accurately portray how awful it was. You can’t tell there’s color in it, it just looks like Crazy Eyes’ hair on OITNB. So, Mrs. Ruiner basically thought she had upset a mentally ill person.

That would be enough. It really would. It’s not, though. A couple of months later, I was walking Dexter and noticed a big FOR SALE sign in front of Tessa’s house. The house I kept Mrs. Ruiner from going to. Every time I walked past that house, I felt guilty. I wished I could find the woman and tell her I was wrong.

One Night, walking Dexter, I noticed that the house directly across the street from Tessa’s, was being moved into. Not being on a lake lot, the house had sat on the market for a good while. I was curious about the new neighbors, they would be just 3 houses down and across from us. I was hoping for a single father with a great career and affinity for horizontaly challenged women. That, or teenagers who could babysit. I walked over and saw a woman unloading some boxes from her minivan. Her very familiar looking minivan. Where do I know that van from? Before I could think about it, I was noticed and went to introduce myself. My hand extended, I said “hello, I’m Angela, I’m your neighbor down the street.” She looked back at me and it suddenly registered. She shook my hand and said “I believe  we’ve met, My name is Mary Ruiner”.